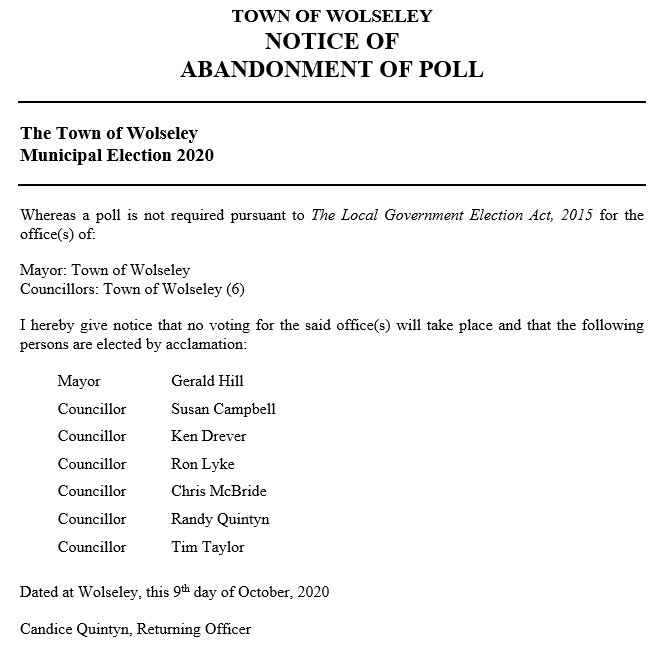 The following is in relation to the upcoming school board elections being held on November 9th, 2020. The completed forms must be received at Division Office no later than 4 pm, on Wednesday October 21, 2020.

Notice of Call for Nominations

PUBLIC NOTICE is hereby given that nominations of candidates for the offices of:

Withdrawing a Nomination – A candidate may withdraw his/her nomination by providing the Returning Officer with a written declaration during normal office hours until 24 hours after the close of Nomination Day (being Thursday, October 8 at 4:00PM). The statement of withdrawal (not a prescribed form) must be signed by the candidate and witnessed by: two witnesses; or the Returning Officer. The name of a person who withdraws his/her nomination must not appear on the ballot.
Number of Candidates > Number of Vacancies = Vote Required
Number of Candidates = Number of Vacancies = Candidates Acclaimed
Number of Candidates < Number of Vacancies = Call for Further Nominations
Municipal Governance 101 – to encourage participation in municipal governance and increase understanding of what it means to be on Council, Municipalities of Saskatchewan (formerly known as Saskatchewan Urban Municipalities Association, or “SUMA”) created a series of FREE virtual sessions designed for anyone who has an interest in municipal politics or who is thinking of running for council in the upcoming municipal elections.
Recordings of the sessions are now available on the Municipalities of Saskatchewan YouTube channel. We are sharing these videos with anyone in our municipality who has an interest in municipal governance or is thinking of running for municipal council.
Recordings:
Municipal Governance 101: Introduction to Local Government
Municipal Governance 101: Town Hall

There are no upcoming events.